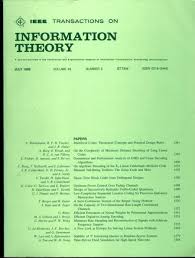 The review took more than two years, but no substantial problem was pointed out. The paper proposes a modification of the Chow-Liu-Suzuki algorithm which learns a forest from a data set but also describes the history of the procedure.  The story started with my old paper in UAI-93, Washington DC.

The photo was taken when I visited Spain for giving a talk at ISIT-16.

Iconic One Theme | Powered by Wordpress